The Santa Clara County Association of REALTORS® (SCCAOR) installed Gustavo Gonzalez as its President during an evening ceremony at Villa Ragusa in Campbell on January 24. He will serve as the 2019 President of SCCAOR, a real estate trade organization that represents over 6,400 REALTOR® and Affiliate members in Santa Clara County. 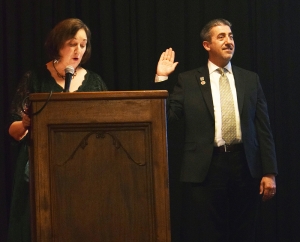 “We are so fortunate to have a passionate leader like Gustavo Gonzalez as our President,” said Neil Collins, SCCAOR CEO. “He has served as a civic leader while on the Alum Rock School board, he has provided affordable housing as a property manager, and he has been a local REALTOR® for over 18 years. I can’t think of anyone more qualified to represent our members.”

Gonzalez is the Broker/Owner of Valley View Properties based in San Jose. He served on the SCCAOR Board of Directors from 2007 to 2009 and was Vice President in 2014 and President-Elect in 2018. He has also been a member of the SCCAOR Professional Standards Committee since 2008.

“Family has always been an important part of my life,” said Gonzalez. “My theme this year as President is ‘The REALTOR® Familia – Coming together is a beginning, keeping together is progress, working together is a success.’ I look forward to a great year of collaboration and teamwork with SCCAOR’s Directors, Committee Chairs, Staff and Members. We are only limited by our imagination!”