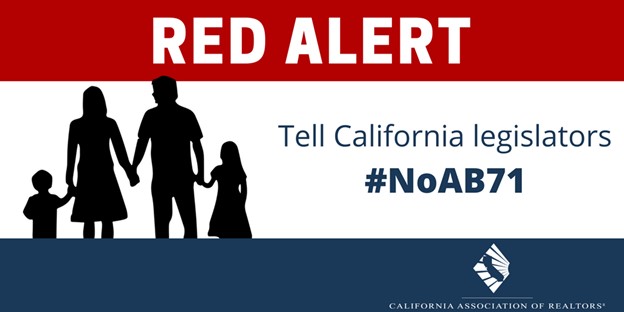 In advance of a possible floor vote in the Assembly, C.A.R. issued a series of Red Alerts, asking REALTORS® in targeted legislative districts to call their Assembly Member to urge them to vote “NO” on the bill. Others were asked to help spread the word on social media. And Key Contacts – our first-line volunteers who work day-in, day-out with legislators with whom them have a personal relationship – worked to educate the legislators and their staff about the MID and the need to preserve it.

It worked! In just two days, over 1,600 calls were placed, over 400 Tweets were posted using our hashtag #NoAB71, and countless others posted on Facebook. And, in many cases, Key Contacts were able to confirm their legislator’s opposition to the bill.

AB 71 has been eligible to be voted on by the entire Assembly since Wednesday and last night the Assembly adjourned until next week without taking action on the bill, presumably because the bill did not have the support necessary to pass it. This is thanks almost entirely to all of the REALTORS®– the only large political organization opposing AB 71 — who called their legislators and still more, including local association staff, who helped spread the word.

Because AB 71 has an “urgency” clause, it can still be voted on any time before the end of session in early September. And we will be asking some of you to reinforce your legislator’s opposition to the bill by sending emails or posting to social media. Be looking for that Red Alert early next week.

Thank you to everyone who took action on this bill so quickly. It really does take an army – a REALTOR® army!

SCCAOR and C.A.R. are OPPOSING UNLESS AMENDED AB 71 (Chiu), a bill that would eliminate the mortgage interest deduction for second homes to fund an increase in low-income housing tax credits. While C.A.R. supports increasing the amount of tax credits available for low-income housing, the association is opposed to doing so at the expense of the mortgage interest deduction for second homes. AB 71 will be voted on by the entire Assembly as soon as  Wednesday, May 31st.

To learn more about this issue, visit www.SaveYourMID.org.  You can also contact DeAnn Kerr (deannk@car.org) or Rian Barrett (rianb@car.org) with any questions.